Saxon "Unleash the Beast" (aka: unleash the denim & leather) 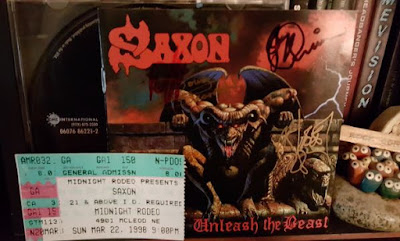 Where were you in '97 when Saxon unleashed the beast? < sung to "Denim and Leather" > Yeah, dorky, but that song popped into my head when I started typing.

Let me preface this by saying I'm a HUGE Saxon fan. Love the classic stuff from the 80s and everything leading up to "Battering Ram" (2015) and their 10th live album "Let Me Feel Your Power" (2016). 1997's "Unleash the Beast" is one of my favorite Saxon releases of all time (behind "Power and the Glory" which is my favorite).  Pretty bold, I know.  Especially since it was the first album without Graham Oliver (guitarist and one of the founding members).

New axe slinger Doug Scarratt was brought into the fold in '96 (his first appearance with the band was 1996's live album "The Eagle Has Landed Prt II") and that classic Saxon sound was nowhere to be found. Graham has his own sound and style which no one can replicate. Yes, a little devil's advocate here, but as I mentioned, this one is second to PATG.

Every song is incredibly melodic, in-sync with the next song, and pretty damn heavy (with the exception of "Absent Friends" - but heavy lyrically) and that's been missing in the Saxon repertoire from Rock The Nations (1986) through Dogs of War (1995).  Of course just my opinion, but I've listened to those albums a lot and they don't pack a punch like any of the tunes on this album.

Doug brought in some much needed ass kicking riffs and solos. Entire album is tops, but choosing some "listen to these now" songs I'd go with "The Thin Red Line, "Circle Of Light", "Cut Out The Disease" (written about Graham Oliver - ouch), "Ministry Of Fools", and the title track. That's half the album right there (Track 1 "Gothic Dreams" is a 90 second intro). The rhythm, back line, solos, Biff well, being Biff.....what's not to like?

I cannot begin to fathom that this album will be 20 years old this year on Oct 14th.  I had a golden opportunity to see Saxon on this tour March 22, 1998 at a local podunk country facility called Midnight Rodeo (full capacity was 1600).  Sold out day before the concert.  I was able to interview Biff and Doug (on camera) for a local public access cable show (cue Wayne's World - "We're not worthy!") which my buddy did once a week; from a studio, not his basement. Dream come true to finally meet the band - especially Biff (hence the signed CD booklet - they also signed my Power and the Glory, Crusader and Wheels of Steel too).

Interview went well. I was a tad nervous sitting next to Biff; a vocalist I've idolized since 1981. And I royally screwed up pronouncing Doug Scarratt's last name (sounds like 'carrot' with an 'S') and I mispronounced it....twice...on camera.  STOP TAPING! And proceeded to bury my face in my hands. Biff put his arm around me, laughed and said it couldn't get any worse from here. HA! Doug laughed as well.  At first he seemed annoyed, but he knew I was nervous and 100% fanboy.  Hell, I tried not to.  I've met a ton of bands in my life and always kept my cool, but Saxon was just one of those legendary bands - idols.

Got through the interview unscathed, took pictures, signed album covers, CD booklets, and off I went to stash the video camera (as in VHS - video tape recorder) so I could be up front for the show.  Of course back then, I bootlegged many concerts I attended with a cool little micro-cassette recorder that I could hide on me.  If the end product was being able to identify each song, then the cassette was a keeper.

The concert was two hours and they played most of Unleashed and of course the anthems that put them on the map: Wheels of Steel, Denim & Leather, Princess of the Night, 20,000 Feet, Dallas 1 PM, Motorcycle Man, Strong Arm of the Law, Power and the Glory and Crusader.  I'm sure I'm missing a few more.  But the guys were on fire and it was awesome to see them in such an intimate setting.  Saxon normally plays to 5,000-20,000 people in stadiums over in Europe.

That night I had the time of my life.  My bootleg recording came out okay too. There was so much shoving, crushing and shit going on up front (as usual), that the recorder mic was covered up too much in my pocket.  I didn't think to check on it because I was having way too much fun.  Normally I checked on the mic position, but not that night. 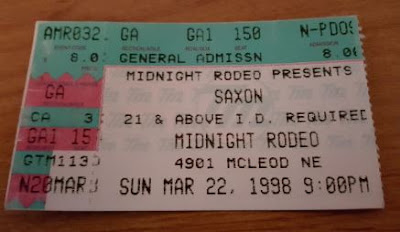