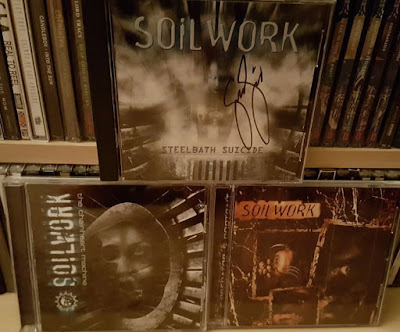 I was on a complete old-school Soilwork kick today. I have nothing against recent releases (The Ride Majestic, The Living Infinite, The Panic Broadcast etc.), but they definitely don't crank out the ultra metal music they once did.

Which is why I started things off with their debut album Steelbath Suicide (1998). First Soilwork song I ever heard was #SadisticLullabye and the second was #TheAardvarkTrail Needless to say, I was hooked from there. The melodies are so insanely perfect.

Anyway, then it was onto The Chainheart Machine (2000). The second track #Bulletbeast" is such a phenomenal tune. Definitely one of my all-time favorites due to the minute and a half music interlude in the middle of the song. I'm sure I had that tune on repeat for a half hour.

Then it was on to their third release, A Predator's Portrait (2001). Floored by this one completely. Hard to choose a favorite, but #BastardChain #PredatorsPortrait, and #TheAnalyst come to mind. I'm a sucker for Swedish metal bands. And vocalist Björn "Speed" Strid has such a unique voice. He can scream and rage one minute, then sing clean the next. He's pretty remarkable and ranks up there as one of my Top 5 singer. Google/Wiki him and you'll see how many guest appearances he has on other albums outside of Soilwork.

Also, guitarists Peter Wichers and Ola Frenning lay down such intense fretwork and incorporate out of this world melodic overtones. It's a shame neither one of them are part of this band anymore.

If you've never heard of Soilwork, then now is a good time as any to check them out. I have a funny feeling I'll be listening to more Soilwork tomorrow.