Blast From The Past: Sword "Metalized" (aka: best eight bucks ever spent in 1986) 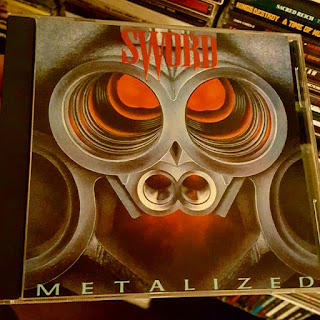 Without a doubt, this gem is one of my favorites.  Sword's "Metalized" is that nugget of gold you have in your collection that you cherish. Well, I had this album on cassette (never owned it on vinyl) and bought it as one of those "chance" moments.  The one where you look at the cover and think, "Hmmmm, maybe it'll kick ass."  Well, this was one of those back in 1986.  Probably the best eight bucks spent back in the day. I was ready for it to suck when I popped it into my tape deck.  And it didn't.....it blew me away.

All I heard was amazing heavy metal music blaring from my speakers. Guitarist Mike Plant was riffing and throwing down some insane solos. And vocalist Rick Hughes commanded such a presence on every song.  Screamed, sang, the guy had it all. His brother Dan Hughes on drums; a monster in his own right. And bassist Mike Larock (loved his last name) lays down some solid work here too.

The production quality is something to be desired, even for the mid-80s, but that didn't keep me from jamming this all the time.  All the tracks are standouts in my opinion.  Not one bad song in the batch, but if I had to pick favorites it would be FTW, Children Of Heaven, Stoned Again, Dare To Spit, and Evil Spell (Rick's scream was worth the price alone).

I also own their second album "Sweet Dreams" which was released in 1988. That one is on deck. After their 2nd album failed to make any impact (and this is following an opening spot on Metallica's Master of Puppets 1986 tour).  After Sword disbanded, Rick formed a new band in the early 90s called Saints & Sinners and released one self-titled album in '92 in the vein of Bon Jovi-meets-most late 80s early 90s flair bands (yes, flair).  I distinctly remember a few things about this band. 1) I freaked when I learned Aldo Nova had produced it.  2) The "hit song "Walk That Walk" made me cringe...HARD  3) I saw this band perform at a small bar in Albuquerque, NM and they were way better live.