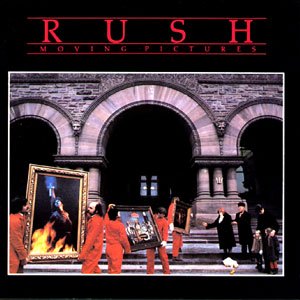 Rush’s eighth studio album, “Moving Pictures” was released 36 years ago today (Feb 12, 1981). I know many fans consider “2112” to be THE ONE, but this is the album that made me an certified Rush freak. Not that “2112”, “Hemispheres” or “Permanent Waves” sucked or anything, because I love those albums quite a bit.  But every song here just flowed perfectly.

The “Moving Pictures” tour would be the first time seeing Rush perform live – Albuquerque, NM / Tingley Coliseum 04/05/81 (support band: Golden Earring - they had a popular tune called "Twilight Zone") – I was in 8th grade. I cannot describe how I felt standing there watching this band just blow my mind. I knew every song off MP since I had listened to it constantly. I couldn’t believe every note was delivered by just three guys. I didn’t know how they’d pull it off in concert and figured (in my 14 yr old mind) they would have an extra musician on tour.  Yeeeaahnnnooo. Fourth guy? What, was I high?  My 14 year old mind was on overload.

This album would go on to become a standard in my household as the years went on.  Eventually affecting my daughter enough to get used to hearing it every October.  And for whatever reason, Rush is seasonal for me.  I’m prone to listening to them more often between Oct-Feb than any other time of the year.  Don’t ask.....I have a number of bands like that. Weird, I know.  That's me.

Having seen Rush live so many times since 1981 has been nothing short of amazing. And for Rush to go one further by performing the entire Moving Pictures album in its entirety on the 2010 Time Machine Tour was a dream come true.  Best part - they kicked off the tour here in my hometown; Albuquerque, NM on 6/29/10. Even more special to me because it would be the first time my daughter would see Rush. Best part…..she WANTED to go.

I own five copies of MP:


I'll have to dig those out and post some photos.

Feeling like a geezer once again.  Happy 36th anniversary to a classic album.