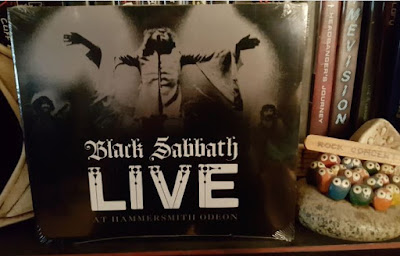 I remember purchasing this one on the Rhino/Warner Bros. website in 2007.  It was a series called "Rhino Handmade" and it was limited to 5000 copies. I made a conscious effort to purchase two copies for a few reasons; they're limited edition, numbered, and I wanted to keep one factory sealed so I could open the other.  Normally my plan of attack as long as the item I'm purchasing isn't too expensive. If I remember correctly, these were $15 a piece.  And Rhino/Warner Bros. had just released "Black Sabbath - The Dio Years" a month prior to this one.  Knowing the Dio Sabbath lineup was back in business and ready to roll as Heaven & Hell made my year. Sweetening the pot with this collector's item was just icing (molten metal) on the cake.

Having been a Ronnie James Dio fan since his Rainbow days (I didn't know about Elf until the late 70s) and LOVING "Heaven and Hell" and "Mob Rules", buying this was a definite no-brainer. First and foremost, this was an unreleased concert from the Mob Rules tour. I did own (still do) a bootleg CD-R/silver copy; but the sound was pretty horrid.  I knew this mastered copy would sound incredible and probably better than the atrocious "Live Evil" quiet/no balls version (which wound up being true). I had only one gripe when I saw the track listing prior to buying it, "Where is "Sign of the Southern Cross"?!" But upon further inspection I saw two tracks not included on "Live Evil"; "Country Girl" and "Slipping Away", so that made up for it.  Threw my money at Rhino/Warner Bros., bought two copies and waited for them to arrive....patiently.

OK, not so patiently because I visited my favorite FLAC (Lossless audio) site and someone had already received their copy and uploaded it for the world to procure (one of my favorite words).  I couldn't help myself and had to hear it. So I procured the FLAC files, burned them to a CD-R, threw on some headphones and was blown away.  Yeah, this is way superior over "Live Evil"...no doubt about it.  You could actually hear all the instruments!  Holy shit!!  That crappy "Live Evil" had everything lost in the mix.  This one has Tony's guitar in your face, Geezer's bass slapping you in the head, Vinny's pounding his drums where you could feel it in your chest, and Ronnie singing his damn ass off and not mixed way up over everyone.  Finally!  Someone did this band justice and released a live album to be proud of for eons. Neon Knights, Black Sabbath, Slipping Away, The Mob Rules, Heaven and Hell, and Voodoo are all show stoppers here.  Yes, there's feedback and squelching going on during the show, but it doesn't take away from the performance at all.  No telling how many times I listened to this in one sitting (okay okay....five times).  One of my favorite live albums of all-time.....period.  And a hell of a nod to Ronnie who we lost in 2010 and keyboardist Geoff Nicholls who we lost this year (both to cancer).

Fast forward to delivery day.  They arrived!  When I removed them from the packing envelope I just sat there trying to figure out which one I should open and which to keep sealed.  They're both numbered, but the number is found INSIDE the packaging, not outside on the back insert like most. UGH! Such a dilemma for me. Then I started thinking about the newly burned CD-R I had just created.  I already know what it sounds like so should I even open these? My final decision?  Never opened them. They're both sealed to this day.  I have no clue what they're numbered.  Maybe I have #0001 or #5000...who knows. Or, maybe when I'm on my death bed I'll crack them both open.

Side note: "Mob Rules" was re-released in 2010 as a deluxe edition and includes this show as the bonus second CD.  I'm sure you can find it on YouTube if you haven't already gone that route.

I own this concert below and it's another favorite of mine. Tony's pre-Black Sabbath guitar interlude is nice and easy then he fuckin' riffs into the song.  Love it! Only one Tony Iommi.