Megadeth’s latest album, Dystopia, was released worldwide last week (Fri Jan 22nd).  I wanted to spend some time getting to know this one inside and out.  It certainly wasn't hard to like and didn't require any amount of time for it to grow on me. Having two new members join (Angra guitarist Kiko Loureiro and Lamb Of God skinsman Chris Adler) alters a bands' sound.  Regardless of the high level of musicianship these two guys bring to the table, I just wanted to soak this up because I'm not only a huge Megadeth fan, but also a fan of Angra and LOG since day one.

A lot of fans hated (as in, ranked it next to Risk) the last release, Super Collider.  I enjoyed the nuances of it all.  I'm not a fan of the Risk album and can only assume that the fans were hoping for Rust In Peace Part 2.  That didn't happen and will never happen.

Many of the Megadeth albums released in the 2000s are hit or miss for me. Minus Dystopia, I'm split on the six studio albums they've released over the past 14 years.


I honestly believe 2009's Endgame is their one album that set the bar since the Rust In Peace days of yore.  Endgame has substance.  It has that Mega-grit feel to it when "Dialectic Chaos" begins and kicks into "This Day We Fight!". Then it's "44 Minutes", "1,320" and so on.

As a fan, you want a band you watched develop before your eyes and ears to achieve greatness with every album.  Megadeth had that from 1985s Killing Is My Business... to 1994s Youthanasia.  Now Cryptic Writings isn't a slouch, but there were signs of change.  It's no secret that Dave had been after the all elusive radio hit.  Closest 'hit' they had was "Symphony Of Destruction".  Some say he's been chasing Metallica over the years.  But it would be impossible to duplicate the mega-success (pun intended....too soon?) of the Black Album.  But hell, the albums Dave cranked out were far heavier than Black Album, Load, Reload and St. Anger combined.  And not for nothing, I wanted the new album to sucker-punch my ass and stop hoping for Endgame Part II.

OK Rick, so what does all this have to do with Dystopia?  Hold on, I'm getting there.

Endgame was THE bar...the one to top.  Dystopia is THAT album.

Dystopia is catchy, heavy, ferocious, melodic, thrashy, riff-o-rama-mama and quite arguably the band’s best since 2009's Endgame (sorry, I know I have a hard-on for that album) or anything they released in the 90s (besides Risk). No offense to those who like that album.

Dave and Co. channel the days of early 'Deth.  The old-school fans will eat up “Fatal Illusion,” “Death From Within” (tells a story of the Greeks invading Troy), and “Post American World”,  The instrumental “Conquer Or Die!” begins with layered acoustic guitar work that either pays homage to Van Halen's "Spanish Fly" or Randy Rhoads’ “Diary Of A Madman” intro. The song that nails it for me is "Poisonous Shadows".  It's one that Kiko had a hand putting together and the solo that threw ol' Dave on his ass.  Truth be told, I pitched in to their PledgeMusic about eight months ago and watched the studio video footage of Kiko and Dave throwing down on guitar.  Plus, I got an autographed CD booklet out of it too.  And also bought the Best Buy Box Set (Virtual Reality goggles and two bonus songs ["Look Who's Talking" and "Last Dying Wish"] not on the original release).  Posted a picture of both at the bottom of this blog.

SIDEBAR:  Give the new Eddie Trunk podcast a listen. He interviews Dave and there's quite a bit of Kiko props given. LINK >  Eddie Trunk Podcast - Dave Mustaine

I was swayed back and forth between older styles and all the exciting new sounds emanating from my speakers. Megadeth returned to that familiar mix of their old-school sound with The System Has Failed style vocals (some of Dave's best). The guitar hooks are downright thrashy (‘The Threat Is Real’ and 'Fatal Illusion" - jeez, every track). Dystopia is crammed with tons of melodic riffing.  The solo's peppered throughout this album are guaranteed to rip your face off.

If you're a diehard fan you won't be disappointed. There aren't any fillers to be found here.  No weak tunes. Just Megadeth going for it...balls out....tearing it up and unleashing a sound that's all too familiar to those of us who knew this was dwelling inside Mustaine.

If Dave is finished chasing after that elusive hit radio song, then thank fucking God!  Because this is the album we've been waiting for.  Nothing against Marty Friedman or Nick Menza because they rule for many reasons, but I wasn't wanting the Rust In Peace lineup to get back together. I know Dave tried to do that (listen to that Eddie Trunk podcast) and it didn't work out.  Again, thank fuckin' God! This album wouldn't exist if it did work out and Kiko and Chris wouldn't have joined.

And I suck.  I hardly mentioned Chris Adler or Dave Ellefson at all.  Let me fix that.  Ellefson must've replaced a few spark plugs because he's firing on all of them now.  Maybe his time in that all-star band Metal Allegiance has him breathing new life. Whatever happened, he's back to the Dave (or Jr) we know and love. Now for Adler - he runs circles around every drummer ever to set foot in Megadeth. Yeah, I went there. Not sure how Shawn Drover stayed as long as he did.  Shit, I just went there, again!  The guy doesn't let up anywhere.

With all that said, I give this 2 out of 5 stars. Kidding.....shit!  One, I don't do that star ranking crap. And two, Dystopia should be up for 'Album of the Year'. 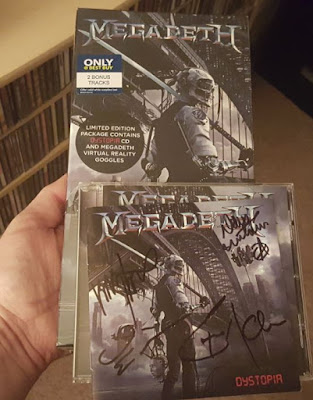