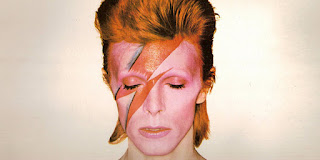 First and foremost I want to say one thing - "FUCK YOU CANCER!!"

I'm not even close to getting over the death of Lemmy and now we lose Bowie too?

I spent the entire day listening to the David Bowie albums I love ('Space Oddity', 'Hunky Dory', 'Aladdin Sane', 'Diamond Dogs', 'The Rise and Fall of Ziggy Stardust and the Spiders From Mars', 'Young Americans', and 'Station To Station').  He released over twenty albums in his career and I know I own more than half.

As a kid, everytime I turned on the radio in the 70s I would always hear at least one or two Bowie tunes in a one hour span.  If it wasn't Led Zeppelin, Black Sabbath, the Stones, the Eagles, Elton John or Paul McCartney jamming the airwaves, it was Bowie - "Space Oddity", "Rebel Rebel", "Suffragette City", "Changes", "Fame" "Golden Years", "Young Americans", and "Heroes".  And those songs stuck in my head forever.

I grew up on Hard Rock (Sabbath, Zeppelin, Aerosmith, Purple), but I also had a huge helping of the Beatles, Elton John, T.Rex, the Sweet, KISS, the Rolling Stones and David Bowie.  I was a kid. There was zero difference to me between rock, hard rock, glam, contemporary rock and all that.  If I liked what I heard, then that was it.  Sold. Done.

There was hardly any part of pop culture that he didn't touch. From music, to fashion, and movies. Bowie transcended a lot of people in many ways.  I'm sure more than anything I've ever experienced. But he's always been a part of this world creating art and never apologizing to anyone.  During a 1997 concert on his 50th birthday in Madison Square Garden he said, "I don't know where I'm going from here, but I promise it won't be boring." That has become a very infamous quote over the years and it has always held true from day one.  It has never been boring....ever.

I read through a number of online articles today and the one that spoke to me the most was from long time friend/producer Tony Visconti.

Tony Visconti via his Facebook page:
"Most of the album's lyrics were confirmed to be foretelling Bowie's eventual death from his secret 18-month long battle with liver cancer, ultimately revealing that Bowie had actually planned for the album to be his swan song or "parting gift" for his fans.  He always did what he wanted to do. And he wanted to do it his way and he wanted to do it the best way. His death was no different from his life - a work of Art. He made Blackstar for us, his parting gift. I knew for a year this was the way it would be. I wasn't, however, prepared for it. He was an extraordinary man, full of love and life. He will always be with us. For now, it is appropriate to cry."

Now that hit me between the eyes.

I had the opportunity to see David Bowie perform one time in my life on the Glass Spider tour (Aug 12, 1987 @ Mile High Stadium - Denver, CO).  The setlist was not only amazing, but the tour featured guitarists Peter Frampton and Charlie Sexton (alongside Bowie main man Carlos Alomar). Yeah, three goddamn guitar players on that stage (four including Bowie when he strapped one on).  I was in pure fuckin' heaven for three hours.  I never thought I'd ever see Ziggy Stardust perform live in my life. And here I was in my early 20s soaking up so much greatness in one night.

We lost a pioneer and an artist in every sense of the word. It feels like one precise color was removed from the world.

He was an artist, a rebel, Ziggy, Starman and now he's home.

"I'm feeling very still
And I think my spaceship knows which way to go
Tell my wife I love her very much, she knows
Ground Control to Major Tom"
From the brain of fuscor at 1/11/2016 08:07:00 PM