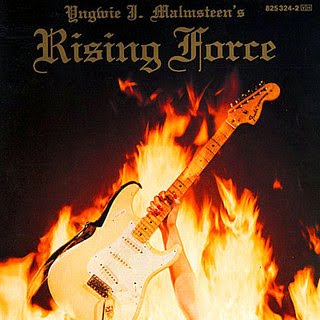 First time I heard Swede-shredder Yngwie Malmsteen was in 1983 when he was featured on three albums/two bands: L.A.’s Steeler (w/Ron Keel on vocals) and Alcatrazz (with one of my favorite all-time vocalists Graham Bonnett) ‘No Parole From Rock and Roll’ and ‘Live Sentence’. I always had a thing for ‘live’ albums and ‘Live Sentence’ literally blew my mind.

When Yngwie decided to release his debut solo album in 1985 “Yngwie J. Malmsteen’s Rising Force ” I knew it would be great, but it blew the doors off all three albums from 1983. Side bar: I always got a kick out of the ‘J’ he had added to his name. I get the classical connection, seriously, I get it…but I joked about that the most back in the day. Kinda went like this, “You have to listen to the new Ingvay Jaaaaaaaaay Malmsteen album!’

My best friend and I listened to this album ALL THE DAMN TIME. We could play it frontward, backward, upside down. We hit every freakin’ note….air guitar of course. This and Armored Saint’s “Marck of the Saint” were the two we listened to, one after the other.
Having not listened to this album for a couple years, until today, I proved I can STILL play every air guitar note for note. <evil grin>

Yngwie set the neo-shredder bar and, in my humble opinion, threw Eddie Van Halen flying into the back seat. I couldn’t believe how he played circles around every guitar player I idolized at the time (with the exception of Randy Rhoads). This album holds up very well after 30 years and doesn’t sound dated to these old ears.

If you’ve never listened to this one the you lived under a very large rock.  Then again, it’s never too late to give ol’ Mr. Jaaaaaaay Malmsteen a go.