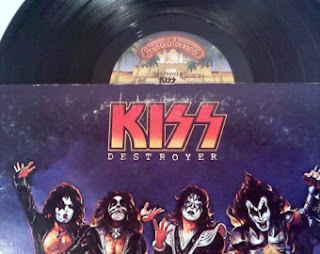 Hmmmmm, where do I begin?

I was knocked on my ass by KISS when ALIVE was released, but this album took it another 900 miles. “Detroit Rock City”, “Flaming Youth”, “Sweet Pain”, “Shout It Out Loud” and “God of Thunder” (ok, that’s half the album right there) where, without a doubt, the tracks I played all the time. I wore the grooves down on the vinyl and had to wait until the next year to get another one. Even though “Beth” was their biggest hit, I wasn’t big on it since I was a little guy wasn’t a fan of the mellow tunes. I don’t know too many KISS fans who don’t cite this album as one of their favorites to this day. Among the 24 studio albums released, Dressed To Kill, Rock and Roll Over, Destroyer, Love Gun, Ace Frehley (solo), and Creatures of the Night are may favorites. But Destroyer stands out among them all because the opening track, “Detorit Rock City” grabs you and thrusts you into a scenario about a guy killed on his way to a Rock concert. That shocked the hell out of me, but I loved it. Hooked from that day on.