Aerosmith “Get Your Wings” celebrates 40 today (aka: side two, track two / aka: ignorance is bliss / aka: my holy grail) 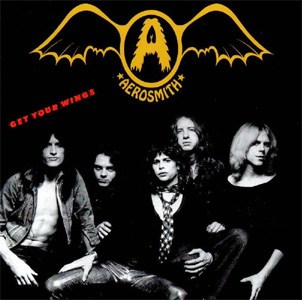 Aerosmith shares a 40 year anniversary with Rush today (see Rush self titled debut turns 40) since March 1st marks the release of 1974’s “Get Your Wings”. An album I didn’t even know about until 1979 (it was the 70’s, I was young and only knew “Dream On” at that point because it was an FM radio staple).

I knew Aerosmith from what I heard on radio (“Dream On”, “Sweet Emotion”, “Last Child”, “Walk This Way” and “Draw The Line”) and nothing else because KISS was still my universe and no other band existed to me. I didn’t get into this band until 1979 when I moved from New Jersey to New Mexico. The local Rock radio station (94 Rock) in Albuquerque would play “Train Kept A Rollin” almost every hour on the hour. And I could never understand why a live version of the song ALWAYS followed the studio version. I also couldn’t believe they mentioned Albuquerque in the song (“Well, we made a stop in Albuquerque“). And I had no clue the song was released five years prior. Yes, I was a clueless dude for a bit. Regardless, I was 100% into the live version and had to have it. I would call the radio station to request only the “live version”. I was either met with the dial tone soon after or, “Yeah..haha…yeah…we can try and do that for ya kid”. I was never informed the studio and live version of “Train” was one track (side two track two, I still remember). Hang on, it gets better.

After I placed my request, I grabbed a blank cassette (an old no-name cassette that had been recorded over countless times and so thin from wear one could probably see through it, scotch tape over the missing tabs, labels removed and replaced with masking tape), popped it into my Radio Shack tape recorder, placed it next to my portable radio’s speaker and waited for the song to play. And as Murphy’s Law would have it, when you sit and wait for a song to play, it’s not gonna happen until you give up after two hours, get up and walk away for 10 seconds only to come back and hear it playing. I went through cassette tapes like a baby goes through diapers by always requesting songs and just hitting record until the tape runs out, then flipping it over until I had the songs I wanted. I finally captured “Train Kept A Rollin” and edited it myself keeping only the live version and adding it to an “already in progress” mixed tape (which had “Iron Man”, “The Zoo”, “Lights Out”, “Boys Are Back In Town” and “Cat Scratch Fever” on Side A).

After a few weeks I figured it was time to own “Get Your Wings” because if the other songs on the album were just as good as “Train” then I’d be in heaven. I went to the local record store and found “Get Your Wings” on vinyl, 8-Track and cassette, but none of them included the live version. Couldn’t find it anywhere! Again, had someone told me (hello 94 Rock DJ) it was on the album then I wouldn’t have been so ignorant. Make that ‘Ignorant Part I’. And none of my new friends were into Rock music at this point.

Enter ‘Ignorant Part II’. I walk up to the record store counter with the album in hand and ask the guy where I can find the live version of “Train Kept A Rollin”. He asks me, “Are you looking for the Tiny Bradshaw, The Yardbirds or the Aerosmith version?” Wait…what?? I thought it was an Aerosmith song. So I hesitated a little bit because I had no idea there were other versions and told him, “Aerosmith”. He told me it was on “Get Your Wings”. I grabbed a copy, looked at the back cover again and didn’t see it listed.

And ‘Ignorant Part III’ I make my way back to the counter with record in hand and tell him (again) that I want the live version of “Train”. He points to the record. I tell him it only has the studio version. <pause> Yeah, he laughed and made sure to grab a few of the other guys who worked there to get in on it at my expense. When I sheepishly asked what was so funny, they grabbed a copy from behind the counter and put it on the turntable…side two, track two. I stood there listening to the studio version and made my case again telling them I didn’t want that version. More laughing ensued. Just as the song ended, I could hear the live audience swell and the live version of “Train” blaring out of the store’s sound system. What the…?? I asked the guys, “It’s recorded like that on the record?” All of them still laughing. <insert Charlie Brown sound of pain when Lucy pulls the football away as he runs in to kick it>

Needless to say, I tried to ignore the embarrassment, plunked down the $12 and bought the album. Once they calmed down, they told me it was cool that I even knew who Aerosmith still was. I had no idea what they meant at that time because I didn’t keep up on the music magazines (Hit Parader, Circus, Creem – didn’t enter my life until 1980 – that’s another story). But I was so damn happy to have found this (my holy grail) and a better sounding copy of “Train” over my cassette version. I went on to appreciate the rest of the album as well (“Same Old Song and Dance”, “Seasons of Wither”, Lord of the Thighs” and “Pandora’s Box”). Every time I think of this album it will always remind me of “Train Kept A Rollin” and my small journey to find the live version.

And if you’ve never heard the Tiny Bradshaw (recorded in 1951) or Yardbird version (1968), go look for them on YouTube. You’ll be surprised.

I give you my holy grail (side two track two):