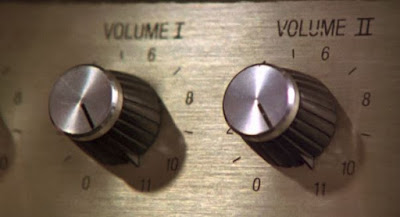 Rob Reiner’s classic, “This is Spinal Tap” is the definition of mockumentary since being released March 2nd 1984.

The story of a British heavy metal band’s comeback tour across the U.S. is the BEST rock satire for music groups, metal heads and film lovers.

You may think a film from the early 80s would have become stale over the years, but Spinal Tap is as fresh as ever. Band members Nigel Tufnel (Christopher Guest), David St. Hubbins (Michael McKean) and Derek Smalls (Harry Shearer) remain hilarious and clueless caricatures. The film and its musical satire still hold up after 30 years and remains the uber inside joke for many musicians, as this movie serves as a reminder of the many ‘spinal tap moments’ in their own careers.

I will cherish this movie forever.

“If we need that extra push over the cliff…….”

“These go to eleven”