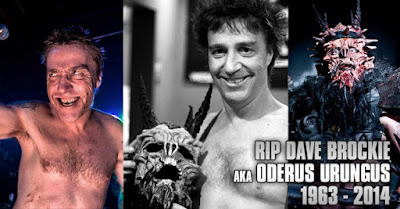 GWAR was always about having fun and making fun of everything (politics, sex, history etc.) and gave everyone THE best over-the-top performances.  I was lucky enough to see GWAR eight times and everytime was something different.  NO ONE can replace the great Oderus Urungus.  He will be missed.

“It is with a saddened heart, that I confirm my dear friend Dave Brockie, artist, musician, and lead singer of GWAR passed away at approximately 6:50 p.m. EST Sunday, March 23, 2014,” Flanagan said. “His body was found Sunday by his bandmate at his home in Richmond, VA. Richmond authorities have confirmed his death and next of kin has been notified. A full autopsy will be performed. My main focus right now is to look after my bandmates and his family. More information regarding his death shall be released as the details are confirmed.”

Police were called to the singer’s Richmond home Sunday night after responding to a call by Brockie’s roommate. Brockie had already died by the time police arrived. Foul play is not suspected at this time, but a cause of death has yet to be determined.

“Dave was one of the funniest, smartest, most creative and energetic persons I’ve known,” former Gwar bassist Mike Bishop told the paper. “He was brash sometimes, always crass, irreverent, he was hilarious in every way. But he was also deeply intelligent and interested in life, history, politics and art.”

“I wish it was a joke,” added former band member Chris Bopst. “Everyone is in shock.”

Brockie had been in a punk band named Death Piggy that staged crude plays when he founded Gwar in 1984. After meeting band member Hunter Jackson, who had created props for Death Piggy and began work on the film Scumdogs of the Universe, Brockie used the outlandish costumes created for the film to form the joke group Gwaaarrrgghhlllgh. After numerous lineup changes and the shortening of the band name, Brockie dissolved Death Piggy and led Gwar, who released their debut album Hell-O in 1988.

The satirical metal band quickly earned a following for its macabre, over-the-top costumes and scatological, offensive lyrics, fashioning themselves interplanetary warriors descended from aliens who arrived on Earth to enslave and slaughter the human race.  The band celebrated their 30th anniversary in 2014, having released their 13th album, Battle Maximus, last year.

“His penchant for scatological humors belied a lucid wit,” said Bishop. “He was a criminally underrated lyricist and hard rock vocalist, one of the best, ever! A great frontman, a great painter, writer, he was also a hell of a bass guitarist. I loved him. He was capable of great empathy and had a real sense of justice.”
From the brain of fuscor at 2/24/2014 10:30:00 AM