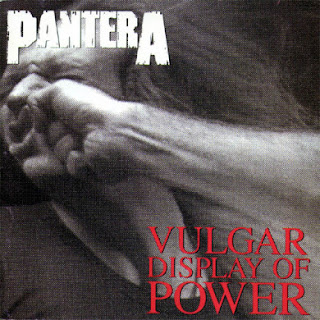 “Mouth for War”, “New Level”, “This Love”, “Walk” and “Hollow” morphed this Texan quartet and slayed their previous release “Cowboys From Hell” from the start. Combined with go-to-producer guru Terry Date, he captured the all-definitive Pantera sound. You know the one.

VDOP was a true testament to the heavy metal genre that Pantera had something to prove. The songs were less polished than their previous release, “Cowboys From Hell” and had grit, dirt, mold and just enough crust to grab the listener by the balls (women by the tatas…yes, I had to go there), smack ’em around and expect them to beg for more. There’s no denying the classic Pantera cuts such as, “Walk”, “Fucking Hostile”, “A New Level” and “Mouth For War”. A number of songs on this album have been covered by a number of bands and artists, especially following the passing of Darrell “Dimebag” Abbott.  The spirit of Dime lives on in all those who loved the guy, but also by the fans who undoubtedly embrace this band forever.

Sidebar:
The 20th anniversary reissue (released May 2012) included an unreleased track, “Piss” and a DVD from the 1992 Monster of Rock performance in Italy (posted below for your viewing pleasure).