Master Of Puppets turns 31 today + RTL concert 32 years to the day (aka: my mini metallica overload - you've been warned.)

This just in from the "holy shit I'm old" department.
Couple of Metallica anniversaries today:
I saw Metallica perform at a local club in Albuquerque, NM 32 years ago today at a local dance club/bar called Graham Central Station (complete with the multicolored dance floor straight out of 1977's Saturday Night Fever) and one year prior to "Master of Puppets" being released upon the masses.  Who knew that a musical juggernaut the size of the moon would be hurled at us in a years time down the road.  But before I go there, I have to reflect on this "Ride The Lightning" concert event of a lifetime.
Prior to the concert (same day), Metallica did an in-store appearance at a local record store (Sound Warehouse) and the place was MOBBED.  The parking lot was.....well...a human parking lot. As spacious as Sound Warehouse was, it wasn't large enough for this crowd. And we're talking 1985, Metallica was not on the radio, not on MTV, and yet they had an underground following that was growing larger by the minute (maybe every half minute).

After waiting in line for two hours, I walked up to a small platform (maybe three steps) where James Hetfield, Lars Ulrich, Kirk Hammett, and Cliff Fuckin' Burton were seated.  I had my "Kill 'Em All", "Ride The Lightning" albums with me.  Walked up to James, nervously shook his hand, handed him both albums to sign and told him how much I loved the music.  He flashed that shit eating grin, thanked me for being a fan, signed the albums; scratched out "lightning" on RTL album cover with his black Sharpie and wrote "bar tab" over it. Next....haha.  Lars and Kirk were in their own world, but both signed the albums.  Then there was Cliff.  I was more nervous about meeting him than I was James. Cliff was kicking back on the end, talking to a few girls, smiling, laughing, just enjoying it all.  Then I walk up and he's super cool. We did the "bro handshake" [sideways, cupped palms] and talked about Kill 'Em All, Lynyrd Skynyrd and the Misfits for a minute. He signed my stuff, stood up and gave me a "bro hug". Patted me on the back and sat back down to greet the next person (who happened to be my brother - who was still chatting away with Kirk and holding up the line....haha....people were pissed - but fuck 'em all).

Concert time. Line was ridiculous to get in, but once in it looked so damn empty.  There were more people at the damn in-store than there were at the show - WTF?! Ticket's were $6.75....that's it!  If I had to guess, I'd say there were maybe 100 people at the concert - 150 tops.  Armored Saint opened (they were touring behind their debut "March of the Saint") and blew the power out after playing for 10 minutes.  Vocalist John Bush informed the crowd they were going to kick our asses harder once the power was restored - and they did. They played as though they were the headliners.  Love that band to this day.

Metallica hit the stage and it's complete anarchy on the floor. Mosh pits in full force. One big one, then two smaller ones. I was up front for the first two songs with my brother, then got the hell outta dodge.  Plus, I was recording the show (shhhhhh.....) on my micro cassette recorder and there was no way I was going to lose that.  The show was far beyond my expectations. I was blown away by the power, strength, and energy radiating from the stage. The guys played with extreme conviction proving their musical abilities not only to shred, but to kick everyone's collective ass. Of the hundreds of shows I've attended, that concert remains at the top of my all-time favorite list.  And I'll post photos of the signed albums once I dig them out of the archives (I've been digging through it lately anyway). They're both on the Megaforce label (prior to signing with Elektra Records and being re-released). 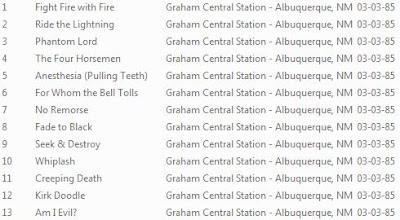 I was still on my 'Ride The Lightning' high in '86, I wasn't prepared for 'Tallica's next aural assault (I said 'aural').  "Master Of Puppets" split things wide open and set the music/album bar so damn high for every Thrash/Metal band in the world to try and match.  This band didn't make videos (yet) to cater to the MTV minions. They didn't wear spandex, tease their hair, or wear makeup. They wore their street clothes, drank from the bottle, killed it onstage, and flat out delivered the goods.

For a band with ZERO radio/MTV airplay, they did pretty damn good reaching the masses and building a global fan base.  The seeds were already planted with 'Kill 'Em All' and 'Ride', but 'Master of Puppets' and opening for Ozzy on the "Ultimate Sin" tour set things in motion....then it snowballed into something more massive.

I was home sick the day 'Master Of Puppets' was released.  My brother picked up a cassette copy for me (see above photo - it's the original one he purchased - still have it) and left on my front doorstep. I had no idea he did that until later in the afternoon when I opened the front door to get the mail.  Forgot about the mail, picked up the cassette and made a bee line to my room.  Popped it into my stereo and it was life changing for this teenager.

"Battery" opened with a majestic acoustic guitar, then segued into ripping riffs in a matter of seconds. Then "Master Of Puppets" set a precedence not many songs can compete with to this day.  I probably listened to this song six times straight before moving onto the next track.  Those were the best 8 minutes and 36 seconds ever. 'Master Of Puppets' is my generation's "Stairway To Heaven". It's as simple as that. And how could this album continue to get better?  Then "The Thing That Should Not Be" kicked in.....just so colossal.  I couldn't get over the absolute heaviness of this song. "Welcome Home (Sanitarium)" was next. It was the perfect balance of chaos, serenity, and melody.  I was then decimated by not one, but two devastating tracks ("Disposable Heroes" & "Leper Messiah") which had contained so many time changes and chugging riffs, I thought, "Who else can play like this?"  Pffft...no one. Then the almighty Cliff Burton laid his greatness upon us with "Orion".  Not that '(Anesthesia) Pulling Teeth' wasn't already phenomenal, but 'Orion' is just gargantuan.  It gave me goosebumps when I first heard it and has the same effect on me to this day (as I'm sure it does for so many others).  The final track, "Damage, Inc." closes this masterpiece going a jillion miles an hour...

"Fuck it all and fucking no regrets
Never happy ending on these dark sets
All's fair for Damage Inc. you see

Step a little closer if you please...."

Metallica then toured with Ozzy on the 'Ultimate Sin' tour.  I caught their show in May '86 and the place went totally off-the-hook during their set. Holy shit.  Biggest mosh pit ever. Judging by the number of people who attended this concert, most were there to see Metallica because more than half cleared out after their set ended.  True story.

Also, for many, 'Master' signaled the end of an era after Cliff died. Who knows how things would've turned out musically had Cliff lived.  There's no telling.  But he put his stamp on this and helped make it what it is and will always remain; a masterpiece. 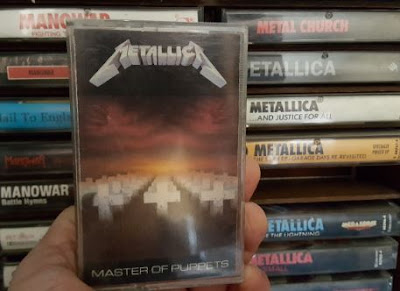 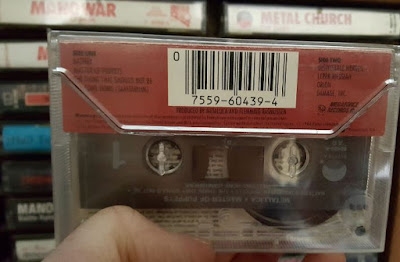 The rust from the screws that hold the cassette together are visible on the inlay card. 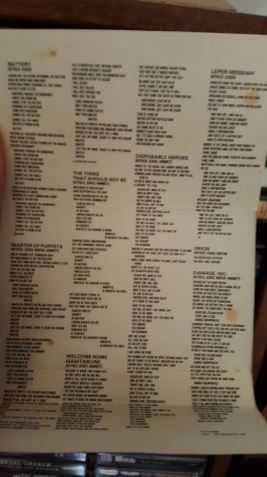 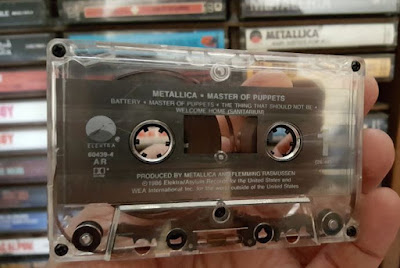 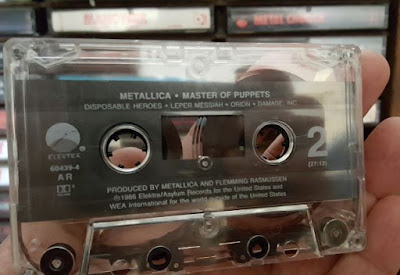 And one of these days I'll crack this open. 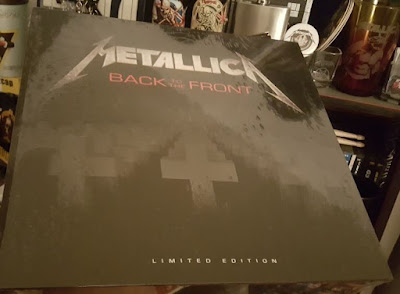