The 'Thrax...the whole 'Thrax and nothin' but the 'Thrax

"Now we're Anthrax and we take no shit
And we don't care for writing hits
The sound you hear is what we like
I'll steal your pop-tarts like I stole your.....Socks!"

Trying to catch up on my blog since last week and failing miserably.  First world problems, right?

Saw Anthrax last week (Wed Feb 10th Albuquerque, NM) then left for Vegas the day after to attend the Black Sabbath show.  Then returned home on Mon 15th, back into work-mode annnnnd it's Friday.

So, Anthrax.  I've never been let down by a performance by these guys over the years.  Show sold-out as well.  Been a loyal fan since their 1984 debut Fistful of Metal was released on Megaforce Records (when it was still an indie label).  I made damn sure to get that baby signed.

I took part in the M&G prior to the concert and brought A LOT of items with me to get signed by the guys. Kinda felt bad for guitarist Jon Donais (ex-Shadows Fall) since everything I brought was Anthrax/S.O.D. related (all prior to him joining the band in 2013).  I had memory relapse and forgot to grab my Shadows Falls CDs and the Anthrax live CD/Blu-ray Chile On Hell he appears on.  He signed a group photo we were given, but other than that, bupkis. He makes his studio album debut with the band on the upcoming release For All Kings (release date: Fri Feb 26th). I've had a copy for over a month and it's pretty amazing. I've read a few online reviews already and some people are slamming it.  But if you give it a proper listen all the way through without any distractions, you'll enjoy the hell out of it. 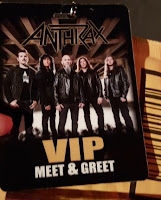 Back to the M&G.  Things kicked off about an hour before the doors opened.  Stood in a small group with others by the front doors. The people at the front of the long line were asking why we didn't go to the back of their line. Ugh, always some drama...Metal show or not.  Bonus part of an M&G is not only meeting the band and hanging out with them for a bit, but also early entry.  My patience run low nowadays listening to these kids complain about having to stand in line and wait to get in.  They have no idea.  But I digress.  There was a 16 yr old guy who was in line for VIP and befriended me by saying how much he loved my Ace Frehley shirt (a total KISS fan and who eats, sleeps, and shits 80s Metal). He was so mad about being born later in life and missing the 80s Metal shows. So, I passed the time talking with him about the many (huge understatement) shows I attended back in the 80s.  His mind couldn't take much more.  He had to sit down for a while (true story).  He made me feel pretty old...haha.  But it was fun talking with him and fielding a ton of questions.

There was about 20 of us doing the M&G. We all had albums, CDs, cassettes (yup), guitars, photos and all that jazz to have autographed.  We were given a VIP laminate, a deck of Anthrax For All Kings playing cards (signed by the band), turntable mat (Evil Twin single cover), photo of band, etc.
The band came out to the lobby where we were waiting and the M&G ensued.  Charlie was first in line, then Joey, Frankie, Jon and Scott. It was great to converse with these guys, especially Joey and Frankie. I try very hard not to fanboy out during these things. It was easier when I wrote for 'zines and interviewed bands because I could do that for an hour.  I told Joey I last met him when his solo band Belladonna opened for Motörhead in 1996. He had a good laugh with that one and went on to tell me about how great that tour was opening for Lemmy.  I always have so much to say and so little time.  Photo opp with the band (we used our own phones)....three photos and done.

Quick shot of the beanie, t-shirt and a few CDs I had signed.  I brought three albums and nine CDs with me not expecting all of them to get signed.  Especially since some M&Gs specifically indicate to bring no more than two items.  No limit indicated for this one, so I figured it was fair game to bring a 'few' items (included Spreading The Disease [30th Anniversary Edition], Among The Living, Armed and Dangerous, Fistful Of Metal and S.O.D. - Speak English Or Die [30th Anniversary Edition]. 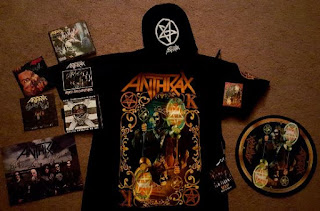 This bad boy was sold-out (kind of rare for 'burque), which made the show even sweeter since this would've been a day off for them (currently on tour opening for Lamb of God).  Yes, opening for LoG. Again, I digress.  Best part about getting an Anthrax headline show...longer set. WIN! Anyway, the 'Thrax delivered a non-stop barrage of Thrash Metal from start to finish.  Riff upon riff. The pit action on the floor was a throwback to the old-school days.  I was up in the balcony snapping photos and making sure I didn't get caught in a mosh (I did plenty of that shit when I was much younger. Thanks but no thanks).   The band was feeding off the energy being thrown back at them from the audience and the band played heavier with every song.  Again, I've never been disappointed with any of their concerts (something I told Frankie earlier and he responded, "Man, I swear, you won't be disappointed by his one either.").  The man didn't lie.

Encore:
I'm the Man --> total surprise!!
Indians
Among the Living

Another one for the books.

I'll always support this band, purchase albums and some swag.  I'm big on supporting the bands I love.  Be sure to pick up their new one For All Kings on Fri Feb 26th.  If you're like me and prefer the deluxe editions, then purchase the 2-CD UK version since it includes four live songs not included on the US version.

"I am the walkin' dude
I can see all the world
Twist your minds with fear
I'm the man with power
Among the living
Follow me or die...."

Some photos I shot with my phone. 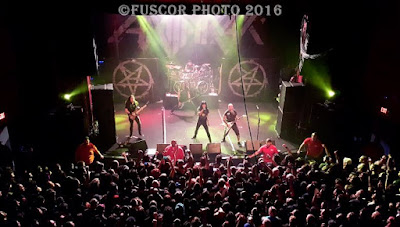 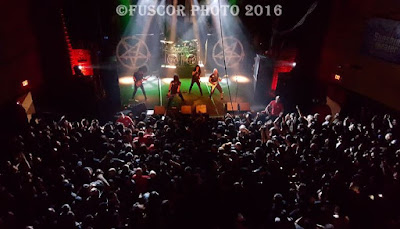 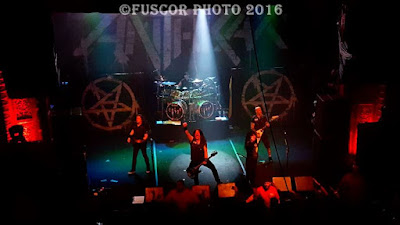 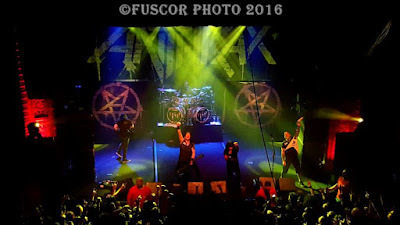 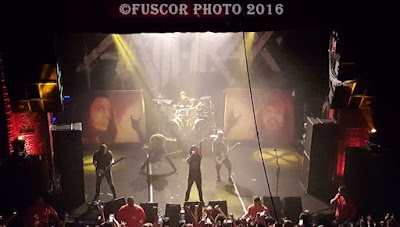 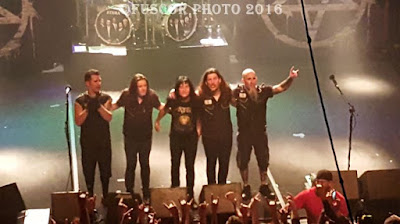