This just in from the "holy shit I'm getting old department":

"It was THIRTY years ago today
Sgt. Pepper taught the band to play...." 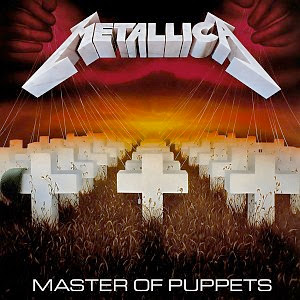 OK, maybe not.  But thirty years ago today Metallica unleashed their juggernaut 'Master of Puppets' upon the masses. I was in awe of this album when it was released.  Thirty years later, it still floors me and it punishes so many other albums out there.  Granted, 'Master' isn't a traditional Thrash album like their debut 'Kill 'Em All', but the band had definitely gained a lot of confidence between it's predecessor 'Ride The Lightning' and this one.

I saw Metallica perform at a local dance club in Albuquerque, NM (Graham Central Station - Armored Saint serving as support band) on this exact date and one measly year prior to MOP being released.  Who the hell knew they had something so fuckin' gigantic brewing in the studio?  I was still on my 'Ride The Lightning' high in '85.  I wasn't prepared for 'Tallica's next aural assault.  And neither was the rest of the world.  Especially when they would tour with Ozzy on the Ultimate Sin tour.  I caught a show in May '86 and the place went totally fanatic over a band they hardly knew. I definitely witnessed greatness that evening.  I was there to see Metallica.  No disrespect to Ozzy and the band, but I probably would've skipped this show if Metallica weren't opening. Just sayin'.

Metallica split things wide open with 'Master' and showed the world the sheer power of 'underground music'. This band didn't make videos (yet) to cater the MTV minions. They didn't wear spandex, tease their hair or wear makeup. They wore their street clothes, drank from the bottle, killed it onstage and delivered the goods.  This was, quite possibly, the first Metal album to be taken seriously.  MOP turned many heads.  Fans, music critics, magazines, and bands/musicians took notice of the beast coming from San Francisco's Bay Area.

For a band with ZERO radio or airplay, they did pretty damn good reaching the masses and building a Godzilla-sized fan base.  Metallica's performances were getting noticed and talked about every day between tape traders and music fans.  The seeds were already planted with 'Kill 'Em All' and 'Ride', but 'Master of Puppets' and the Ozzy tour exposure really set things in motion and then it caught fuckin' fire and went global.

How does one chose their favorite 'Master of Puppets' track?  Still impossible for me to this day.  This is 54 minutes and 46 seconds of greatness:
On the day 'Master of Puppets' was released, I purchased two on vinyl and one on cassette.  Listened to the album everyday when I was home (still own the vinyl - one on Music For Nations label and the other on Elektra).  But I listened to the cassette more often on my Walkman (yup, old guy right here) and wore it out.  Bought another one, wore it out and so on. And I still have the original copy I purchased for my archives.

I got lost in this album.  "Battery" opened with majestic acoustic guitar playing, then ripped heads off in a matter of seconds. Then the namesake "Master of Puppets" set precedence. This was our (Metal fans) "Stairway To Heaven". How could this album continue to get better?  Then "The Thing That Should Not Be" kicked in and was so colossal.  I couldn't get over the heaviness of this song alone.  Then amazed by the slow moving "Welcome Home (Sanitarium)" until it swelled and became a different animal all together.  I was then decimated by not one, but two devastating tracks ("Disposable Heroes" & "Leper Messiah") which had contained so many time changes and chugging riffs, I thought I had died and gone to Metal heaven...seriously. Who played like this?  Then the almighty Cliff Burton laid his greatness upon us with "Orion".  Not that his "(Anesthesia) Pulling Teeth" from 'Kill 'Em All' wasn't already phenomenal enough with a metal spiked cherry on top, but 'Orion' was just sooooooo fucking epic.  It gave me goosebumps when I first heard it and has the same effect on me all these years later.  Then "Damage, Inc." closes this masterpiece out going a million miles an hour.......

"Fuck it all and fucking no regrets
Never happy ending on these dark sets
All's fair for Damage Inc. you see

Step a little closer if you please...."

To me and many others, 'Master' signaled the end of an era after Cliff Burton was killed in a bus accident while on tour in Sweden in the Fall of '86. Who knows how things would've turned out musically had Cliff lived.  I will stop there because the magic captured in this album would never again be repeated or duplicated.

Metallica will always be my Rolling Stones.  I grew up with this band since 1981 and will always remain a loyal fan.  But there's always that something, that "what if" that will linger on forever.

They were the best of their time.