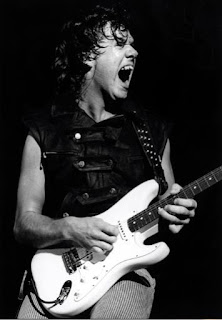 Remembering Gary Moore today on the 5th anniversary of his passing.

Hard to believe Gary's been gone for five years already.  I listen to his music constantly.  I always felt he was such an underrated artist.  The guy could play circles around other guitar players without breaking a sweat.

First time I heard Moore perform was on Thin Lizzy's 'Black Rose: A Rock Legend' (1979).  The melodies on this album (i.e. Waiting For An Alibi and Do Anything You Want To) are brilliant, but so are the many albums Gary released over the years.

I had the pleasure of seeing Gary perform live once in my life (so damn thankful) when his solo band was touring the US for one of my favorite albums Victims of the Future (1983). First of all, this album has so many blazing guitar solos and I wore out my vinyl copy in less than a month (title track groove alone was worn down first - to this day I can never get enough of that song.).  And how can you go wrong when your band also includes Ian Paice (Deep Purple), Neil Carter (UFO) and Neil Murray (Whitesnake)?  And I couldn't get over the guitar solo in the The Yardbirds cover Shapes Of Things.  If you haven't heard it then go do that right now.

Rush was touring in support of their album Grace Under Pressure in 1984 and kicked off that tour in my hometown of Albuquerque, NM (the band had a small history of starting their tours off here). No complaints here, especially since I'm a Rush fanatic. Anyway, Gary and band opened for Rush on select dates and ABQ was one of them.  I couldn't tell you who I was more excited to see at that point. Nobody I hung out with in high school was into Gary Moore as I was. Anytime I would play Victims of the Future cassette (or 1982's Corridors of Power for that matter) on my boombox on the bus [sidebar: I was the DJ on my bus...haha] or at school in the hallway)....nothing. What? Ugh!  I digress.

Opening day of the tour:  May 7th, 1984 - the day had arrived <cue choir angels>  The venue was Tingley Coliseum (where all the concerts took place because it was the largest venue we had at the time). It was built for rodeos and the place always smelled like horseshit (literally).  Aside from that, the sound was always horrible.  Obviously not built for concerts, but again, the only place in town for the big tours to perform. Don't get me wrong, I'm thankful to this day for ol' Tingley because without that place I wouldn't have seen so many amazing concerts.

Majority of the concerts held at Tingley were GA (General Admission).  When buying a ticket you chose either the seated section or the floor.  I always chose the floor. Those were the first to sell out first because everyone and their brother wanted to be as close to the stage as possible (including yours truly). So this meant showing up at the venue four hours before the gates/doors opened (2:00 PM since doors normally opened at 6:00 PM). Could have been a problem for me on this day because it was a Monday and I was still in class at that time....ahem....supposed to be in class at that time.  I caught a ride with a few of my fellow Rush buddies, arrived at Tingley 1:45 PM and there were maybe six or seven people in line. YES!

Stood/sat in line talking to others for a few hours about what else? Rush, Gary Moore, Thin Lizzy and every other band under the sun. The line grew in length until you couldn't see the end of it...perfect.  Gates opened, which led to the front of the venue, and everyone would fuckin' run to form another line in front of the doors of the venue (always hated that).  Needless to say, I was always capable of running fast and more or less had been able to secure the same spot in line with my friends.

Doors open.....quick glance at the tour t-shirts as I ran by....down the corridor, onto the floor, ticket ripped (always hated that too and told the person ripping tickets to rip where I wanted so the ticket wasn't destroyed. I got lucky nine times out of ten and still have 97% of my ticket stubs intact) and straight for the barricade...front and center of the stage.  SAFE!  Again, spoke to all the people around me about Rush, Gary Moore, Thin Lizzy and every band out there.

Show started at 8:00 PM, lights go off, surge of the crowd pushed forward....Gary Moore hit the stage. HOLY SHIT!!  GARY FUCKIN' MOORE!!! He was maybe three feet right in front of me.  HOLY SHIT!! I held my ground best I could (I was maybe 120 lbs and 5ft 10in) and held onto the barricade with all my might to not lose my place.  I was resilient (as I was in the majority of the shows I attended) and able to keep my spot for the entire show (Rush included).  I headbanged to every song.  Sang as loud as I could. Thrust my fist in the air the entire set (with the other hand gripping onto the barricade for dear life).  GARY FUCKIN' MOORE!!

What a setlist.....
His band was tight as hell too, I had hoped Ian Paice and Neil Murray were part of the touring lineup, but that wasn't the case. Still saw Neil Carter and Bobby Chouinard (RIP...who also played in Billy Squire's band).
After seeing Gary Moore perform live for 50 minutes straight, I knew this guy had some goddamn magic that no other guitarist possessed (even to this day).  Not that I didn't think he was 'the shit' already, but seeing him live cemented it all for me.  I watched Gary play every square inch of that guitar.  He didn't move around the stage too much since he was the vocalist. So he remained close to the mic and guitar pedal effects. Not a problem for me....at all.

In my mind and after a few discussions with the crowd around me, Rush had one hell of a show to follow. Especially since Rush was moving more towards keyboard oriented songs and less guitar.

But, not to worry....Rush killed it.  But Gary crushed it.